Courthouse Girls of Farmland in the Press 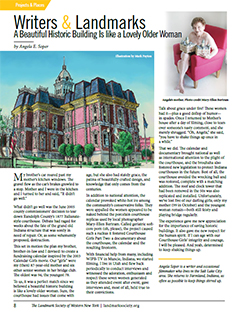 “My brother’s car roared past my mother’s kitchen windows. The gravel flew as the car’s brakes growled to a stop. Mother and I were in the kitchen and I turned to her and said, ‘It didn’t go well.’

What didn’t go well was the June 2005 county commissioners’ decision to tear down Randolph County’s 1877 Italianate-style courthouse. Debate had raged for weeks about the fate of the grand old Indiana structure that was sorely in need of repair. Or, as some vehemently proposed, destruction.

This set in motion the plan my brother, brother-in-law and I devised: to create a fundraising calendar inspired by the 2003 Calendar Girls movie. Our “girls” were my (then) 87-year-old mother and six other senior women in her bridge club. The oldest was 94, the youngest 78.

To us, it was a perfect match since we believed a beautiful historic building is like a lovely older woman. Sure, the courthouse had issues that come with age, but she also had stately grace, the patina of beautifully crafted design, and knowledge that only comes from the centuries.” 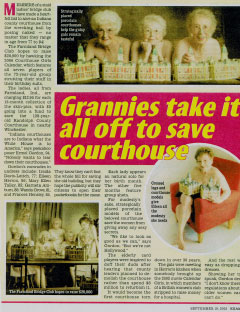 Grannies Take it All Off to Save Courthouse

“The elderly card players were inspired to doff their duds after hearing that county leaders planned to demolish the courthouse rather than spend $6 million to refurbish it.

It would become the first courthouse torn down in over 30 years.

The gals were meeting in Herron's kitchen when somebody brought up the 2003 movie Calendar Girls, in which members of a British women's club stripped to raise money for a hospital.

And the rest was as easy as dropping their dresses.”

Press About the Movie

Both eyebrows and spirits flew up over the film “Courthouse Girls of Farmland,” which The Visionary Edge will screen Saturday evening.

The 59-minute film, directed by Norman Klein, concerns a battle to save a historic building, a conservative township, a controversial 2006 calendar and seven spunky senior women who flew in the face of convention by posing for it — and loved every minute of it.

And meanwhile, back in Gympie, Australia, Heart of Gold festival director Toni Powell is over the moon about having the film as part of our city's big international film festival, in March.

Speaking outside Gympie's own historic court house, she said it was possible some of the women would visit Gympie for the festival.

The film was one of 900 entries in the Heart of Gold event. It is a number which Ms Powell describes as “staggering for a relatively new festival, especially when we have such strict criteria”.

Heart of Gold entries have to be life affirming and uplifting, she said.

“It shows the festival is gaining a reputation worldwide and that's what you want - because that's how you get good films.”

A documentary on the Courthouse Girls calendar saga will make its network television debut Thursday evening on PBS channel WIPB. Courthouse Girls of Farmland airs July 31 at 9 p.m. on WIPB.

The story began in the summer of 2005, soon after the Randolph County Commissioners voted to tear down the county courthouse and build a new one. Members of a Farmland bridge club came up with a plan to raise money for a campaign to stop the demolition and draw attention to the plight of the condemned building.

With help from a noted local photographer and a printing company, the bridge club members - aged 77 to 94 - created a calendar with photos of themselves in suggested states of undress.

We are thrilled to announce that Courthouse Girls of Farmland won the first place Audience Award at the 28th annual Breckenridge Festival of Film held June 5-8, 2008 in beautiful Breckenridge, Colorado. Co-hosted by film critics Jeffrey Lyons and his son Ben Lyons, the festival showcased eight premieres and over 60 independent films.

Five of the “girls” attended the festival—making the drive from Farmland in a van with co-producers Jerome Herron and Larry Francer and Jerome’s sister Anne Hinshaw (the one who keeps us organized). Our delightful film stars were the hit of the festival, garnering a standing ovation when they approached the stage upon announcement of the award and enthusiastic applause later that evening during the festival’s wrap party at the Blue River Bistro. Everyone was touched by their energy, humor, and courage in standing up for a cause close to their hearts.

The only not so great part about the Breckenridge Festival was Eileen Herron’s (Miss October) fall opening night that resulted in a broken hip. However, she had surgery that night by one of the country’s top orthopedic surgeons and was soon back home in Farmland where she is recovering beautifully. The Breckenridge Festival staff and volunteers couldn’t have been more helpful and caring and we are all indebted to them for their outpouring of love and support. Eileen gave everyone orders to enjoy the festival and “not to miss a thing,” but we also shared the excitement with her as you can see from one of the photos in the Pictures Gallery.

And huge thanks to Jeffrey, Ben, and everyone at the Breckenridge Festival of Film—you are the best!

“We are very happy to have presented Courthouse Girls of Farmland at the 10th annual DCIFF. This film weaves a story that is funny, touching and inspiring. Watch it and see how we are never too old to effectuate a positive change in our world.”

Calendar Girls in it for the Courthouse

FARMLAND — Amid all the buzz over seven Farmland bridge players baring it all for a fund-raising calendar, it’s gone unnoticed that six of the women are single. Are they looking for a cure to save the endangered Randolph County Courthouse, or are they really looking for love?

It’s all for the courthouse, they insist with a roar of laughter. No marriage proposals yet, though one man did buy them all ice cream the other day at The Chocolate Moose. “It’s been quite a thing,” said 81-year-old Wanda Grove, one of the models. If anything, it’s been just what local organizers hoped for. A single newspaper story on June 29 hit the Associated Press news wire the same day.

Within a couple of days, the story had criss-crossed the country, appeared in dozens of newspapers and even jumped the ocean into a few more. Television stations have followed suit with their own reports, and now people all over the country are talking about the calendar. But more important to the seven women who posed for their calendar shots Thursday, people are talking about the courthouse.

These women aren’t happy that the Randolph County Board of Commissioners voted to tear down the courthouse. The structure was built to anchor the downtown square in nearby Winchester. They decided to take matters into their own hands and pose nude — covered only by miniature courthouse collectors buildings — in hopes of raising money to stop the demolition.

At age almost 94 — her birthday is July 18 — Ermel Gordon is the oldest of the models, but that doesn’t bother her. When she found out that her six card-playing pals had all committed to the project, she didn’t have the heart to say no. “I like all these girls,” she said as she prepared for the final photo shoot, a series of five group shots. “It’s just something to do together and it’s a good cause. I’m really concerned about the courthouse.”

But that’s where the concern ends. None are worried what their neighbors might say, or what the preacher might say, or what their late husbands would say. Gordon said, “They want us to be ashamed or something.” Eileen Herron, 86, isn’t ashamed of herself. She’s not going to hide the calendar from anyone. “Not a soul. At this age, what’s the difference?” she said. “It’s a fun protest.”

Iraida Davis-Leitch, the only married woman in the bunch, said she can’t believe all the attention the calendar has received. “I’m overwhelmed,” she said. She and the others are getting used to the cameras and reporters, and Davis-Leitch’s favorite answer to the often-asked question of if she’s ever modeled before is, “Not for publication.” Her response always leaves a funny look on the reporter’s face, she said.

The women are all members of a Farmland bridge club, a card club that dates back to 1933. Three calendar models, Garneta Amburn, 85, and Mary Ellen Talley, 85, and Herron are all original members. Talley and Amburn learned to play cards and joined the group when they were in the eighth grade.

The other 85-year-old of the group, Frances Hensley is the shy one. Even after her individual photo shoot with photographer Mary Ellen Bertram in the morning, by mid-afternoon she was still uncomfortable with the thought of being naked in front of the camera — even with the strategically-placed miniature courthouse buildings in front of her. In the back of her mind she isn’t so sure this is a great idea.

Her daughter didn’t think it was either. “She says no,” Hensley said. But then her daughter went off to Florida on vacation. By the time she returns, the photos will be in calendar form and in the hands of a printing company.

What People are Saying...

“Courthouse Girls of Farmland was a great success when we showed it in Half Moon Bay. The audience LOVED the film and had such a good time, no one wanted to leave afterwards. In fact, the film generated an on-the-spot community forum and people started talking about what needed to be done in our little town. I can truly say this movie delighted and inspired everyone.”

“This is a very funny and poignant film about the power of determination, by women who wanted to take a stand, and did.”

"Courthouse Girls of Farmland is fresh and original with just the right balance of social commentary, good humor, and lovable personalities. It's a truly entertaining package!"

- Professor of Communication, University of Utah

“This is a great little film about how standing up for one’s beliefs (in one’s birthday suit, in this case) can educate and empower a community. I loved it!”

“Terrific little film. It amazes me that there are always people who want so desperately to impose their own moral code on others. The passion these Courthouse Girls had to save the courthouse—and the absolute courage they displayed in pursuing their idea—are to be commended and encouraged, not torn down by small minds. Bravo to the filmmakers for getting the story out to a wider audience!”

“These women are marvelous examples of our ‘new’ culture. They are not senior citizens; they are a vibrant, productive part of our society with the energy to get out there and save a historic building for the sake of their future generation. Kudos to the Courthouse Girls of Farmland!”

- Sixty Is the New Forty