Seven Women Who Made a Difference 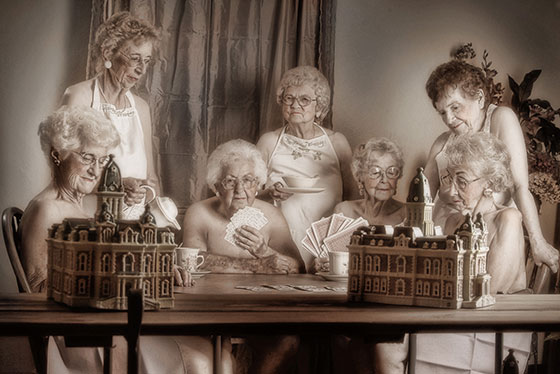 Old age has its advantages, like a daring spit and polish that can only come from years of living and a propensity for looking at life with a twinkle in the eye.  When we began our Courthouse Girls project in 2005, we all felt blessed to work with the seven delightful bridge club players who defied convention and trumped their critics by posing “suggestively” for a calendar. Their goal: to protest proposed destruction of the local historic county courthouse.

Fast forward several years and the courthouse is now back to its early grandeur. It’s been restored and renovated, complete with a new mansard roof and clock tower to take the old structure back to her original glory of the 1800s.

Unfortunately, our beautiful and courageous protestors are no longer with us. We like to think their spirits live on proudly, however, in the historic structure they helped save.

May 22, 2009 Miss July, Ermel Gordon, passed away after a fall in her home. Tiny and quick to laugh about the controversy she and her fellow bridge club players had stirred up back in 2005, Ermel added so much to the project. She was just shy of her 98th birthday when she passed away.

That July 8 we also lost Miss August, Frances Hensley, after she suffered a stroke at her home in Oregon. Frances didn’t hesitate to speak her mind and she was a real trooper throughout our campaign to save the courthouse. Frances would have been 90 in August.

May 13, 2011 we lost Miss February, Garneta Amburn, who had just turned 91. A Valentine’s Day baby, Garneta was a real sweetheart and died peacefully at home. If you’ve seen the film, you may remember Garneta for the rather blunt description she provided for one of the commissioners in the film. Garneta was always making us laugh and had real Farmland spunk.

Miss April, Mary Ellen Talley, left this earth December 29, 2011. She would have been 92 the following April. Those of us who grew up in the Farmland area will always remember her as the soft-spoken teller at the local bank where she worked for many years. And no one will forget her quick, emphatic “No!” when asked by Norm if she thought posing for the calendar was wrong. Her response always elicited big laughs from audiences and succinctly demonstrated the strength of character and convictions of these seven women.

On March, 23, 2016, we lost our lovely, always bejeweled Miss May, Wanda Grove. She was 91, and I am told was still finding things to laugh about right to the end. In addition to being an avid bridge player, she was quite a golfer, boasting three holes in one. How many people can make that claim? During our calendar and documentary experience, she faced a great deal of criticism from members of her church, and she always defended her actions and her beliefs with aplomb.

Finally, we come to 2018. August 9 we lost Jerome’s and my mother, Eileen Herron (Miss October). She would have been 100 on October 21. Jerome, our sister, Anne, and I were with her the entire time as she faded away the last two weeks of her life. And Larry visited with her right before she took a turn for the worse (in her hospital room cracking us all up with her wit). And you know what? She left this earth just as she lived it—with perfect calm and total grace. “I’ve done everything I wanted to do,” she told us a few days before she passed away; she was totally at peace with her life and approaching death.

A few months later on December 16 we lost our remaining Courthouse Girl, Iraida Davis Leitch (Miss December). She would have been 91 in a few days. Iraida still lived at her lovely farmhouse and had attended a great-grandchild’s sporting event the day before she passed away. She had the most gorgeous smile—which she was never without. And trust me, no one wore a strand of pearls with more elegance. 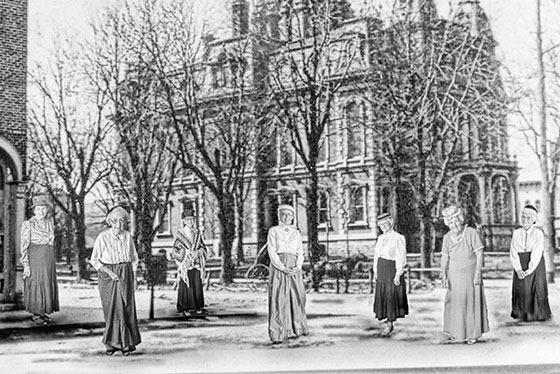 If I were to come up with one word to describe these women it would have to be grace. I’ve used it frequently—because they all embodied this wonderful trait so consistently. I never saw them get angry when people (sometimes long-time acquaintances) hurled insults at them. Instead, they laughed. They became unexpected celebrities as we instigators and producers of the calendar and film hurtled them into the spotlight. When we started the project, they, nor we, had any idea of the maelstrom they would face.

And man, did they encounter a firestorm.

From people in three of the women’s church visiting them late at night and telling them to “repent,” to harsh words in letters to the editor (one writer referred to the calendar as “soft-core porn”) and nasty comments in newspaper articles (“they’ll all be dead in ten years”), these bridge club friends took the high road. Every. Single. Time. Eileen, known as Meme to her family and close friends, had a wonderful way of shrugging off stupid, hateful comments. And more than once Jerome and I were ordered to “calm down” and not let someone’s actions or words get to us.

It was an honor to create Courthouse Girls of Farmland and to get to know these women. They weren’t just gutsy, they were funny. After we won the First Place Audience Award at the 2008 Breckenridge Festival of Film, one of them said, “I guess [county commissioner] can shove this up his ass.” And my mother got a good laugh out of the older man who snuck his phone number into her purse after an event. 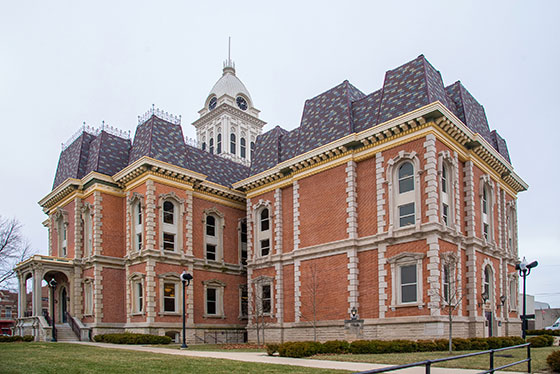 I am sure, even today with the courthouse renovation and addition long finished (it is beautiful) that there are people in the community who still think the old building should have been demolished and the courthouse facilities housed in an old Wal-Mart building (as was proposed by many). And perhaps some of these people are still sneering over the audacity of these seven women who would dare to appear “naked” in a calendar.

Those of us who worked on the calendar and the film are so grateful we had the opportunity to get to know these lovely, courageous women. They epitomize standing up for what you believe in, even if it means ending up on the receiving line of some harsh—and often downright ridiculous—criticism. We will miss our darling girls, and always, always remember them with a smile. They made a difference in the little Hoosier community of Randolph County and were an inspiration to all of us.

Fondly, Angela Soper—and Jerome Herron and Larry Francer and everyone involved with the Courthouse Girls of Farmland.