A story with heart that bares the soul... and a little bit more.

"Whatever you do, or dream you can do, begin it. Boldness has genius, power and magic in it."

Courthouse Girls of Farmland is a documentary about a small town, historic preservation, and seven senior women who got up from their bridge club table to make a bold and controversial statement.

The story began one summer morning in 2005 when the commissioners of East Central Indiana’s Randolph County voted two-to-one to destroy the county’s historic courthouse and replace it with a new building. Many in the area were outraged, especially one family in the small town of nearby Farmland. Discussing the issue in their mother’s kitchen that morning, brother and sister Jerome Herron and Angela Soper and Herron’s partner Larry Francer came up with a plan loosely patterned after the British phenomena, the Calendar Girls. The trio gained support from the town’s nonprofit arm, Historic Farmland USA (known for its innovative promotions and economic development efforts), then got the local photographer and printer on board. And soon Herron and Soper’s 87-year-old mother, Eileen Herron, and six of her bridge club friends were posing as centerfolds for a 2006 Courthouse Girls Calendar.

Aged 77 to 94, the women were photographed “suggestively” with porcelain replicas of the 1877 Italianate-style courthouse placed strategically in front of their bodies. Billed as the women’s personal protest, the calendar was also a fundraiser, with $5.00 from the sale of each calendar going toward a Save the Courthouse Fund. The commissioners’ decision to demolish the historic structure had already fueled emotional, heated debate and the calendar added sparks to the firestorm. Called everything from brilliant to “geriatric soft-core porn,” the women and their action became media headliners as their photos and story graced television channels, radio airwaves, and print publications nationwide—and even in Canada.

But the calendar is only one part of this story. The bigger issue is what’s happening to small towns all across America, especially those with history to be preserved in the form of their buildings, their culture, and the lives of their citizens ... many of whom have lived in these towns since birth. It’s also a story about the value offered society by those who are older. As one of the women was told by a fellow senior during a public appearance: “Show them we may be old but we aren’t dead.”

“When Angela said the word ‘naked,’ I was all ears,” says director Norman Klein with a laugh. “But seriously, as an aging person myself, I was really impressed by these women and their courage to—literally—put themselves on the line for a cause they believed in. And being originally from New York City, I was intrigued with this tiny town and everything it’s done to stay alive. I feel like other communities can learn from it.”

The Courthouse Girls and those who fought the decision to destroy the courthouse are an example of one community’s efforts to preserve and revitalize its place in America’s heartland. We are happy to report that the 2006 calendar raised over $45,000 for the courthouse fund and for Historic Farmland (to support its ongoing efforts to improve the town). The commissioners also voted in 2006 to rescind their earlier motion to destroy the courthouse, and plans are now underway to renovate and expand the historic building to make it a beautiful and viable government building. In addition, because of the courthouse battle, new legislation was recently passed to create a Courthouse Preservation Advisory Commission to help other county officials assess preservation and restoration needs for their courthouses.

The town of Farmland and its delightful Courthouse Girls have proven von Goethe’s words correct: boldness does have genius, power, and magic in it. They’re also proving that “old ladies” can be gutsy and beautiful, and that small town life need never be mundane. In fact, it can be downright exhilarating.

The Illusion of Nudity 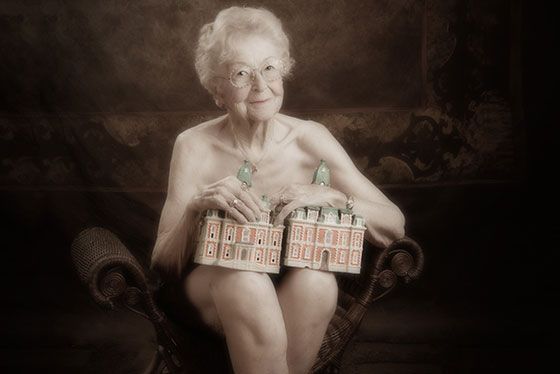 Were they or weren't they? That's the question everybody asked when it came to how our Courthouse Girls posed for the 2006 "Save the Courthouse" calendar. Our models, ranging in age at that time from 77 to 94, refused to tell. After all, aren't the most intriguing and alluring women in the world shrouded with a little mystery? The important thing is, they felt so strongly about saving our county courthouse they were willing to appear to be baring "their all" as a protest to the commissioners' decision to destroy this historic building.

We think the photographs are beautiful, and display these women in perfectly good taste while suggesting there might not be much behind these courthouse replicas except the women themselves. When you see the photos, you see women who are elegant, smiling—obviously enjoying themselves—and perfect examples of why "old" is to be treasured, not discarded.

So, were they or weren't they naked? We'll never tell.