Courthouse Girls of Farmland is a documentary about a small town, historic preservation, and seven senior women who got up from their bridge club table to make a bold and controversial statement.

The story began one summer morning in 2005 when the commissioners of East Central Indiana’s Randolph County voted two-to-one to destroy the county’s historic courthouse and replace it with a new building. Many in the area were outraged, especially one family in the small town of nearby Farmland. Discussing the issue in their mother’s kitchen that morning, brother and sister Jerome Herron and Angela Soper and Herron’s partner Larry Francer came up with a plan loosely patterned after the British phenomena, the Calendar Girls. The trio gained support from the town’s nonprofit arm, Historic Farmland USA (known for its innovative promotions and economic development efforts), then got the local photographer and printer on board. And soon Herron and Soper’s 87-year-old mother, Eileen Herron, and six of her bridge club friends were posing as centerfolds for a 2006 Courthouse Girls Calendar.

Aged 77 to 94, the women were photographed “suggestively” with porcelain replicas of the 1877 Italianate-style courthouse placed strategically in front of their bodies. Billed as the women’s personal protest, the calendar was also a fundraiser, with $5.00 from the sale of each calendar going toward a Save the Courthouse Fund. The commissioners’ decision to demolish the historic structure had already fueled emotional, heated debate and the calendar added sparks to the firestorm. Called everything from brilliant to “geriatric soft-core porn,” the women and their action became media headliners as their photos and story graced television channels, radio airwaves, and print publications nationwide—and even in Canada.

Courthouse Girls of Farmland has been recognized by more than 20+ film festivals! View the full list here. 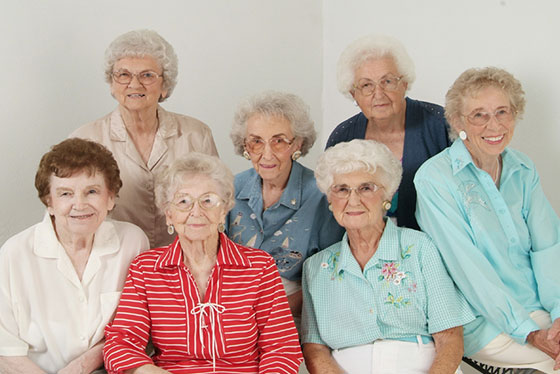 Old age has its advantages, like a daring spit and polish that can only come from years of living and a propensity for looking at life with a twinkle in the eye. When we began our Courthouse Girls project in 2005, we all felt blessed to work with the seven delightful bridge club players who defied convention and trumped their critics by posing “suggestively” for a calendar. Their goal: to protest proposed destruction of the local historic county courthouse.

Fast forward several years and the courthouse is now back to its early grandeur. It’s been restored and renovated, complete with a new mansard roof and clock tower to take the old structure back to her original glory of the 1800s.

Unfortunately, our beautiful and courageous protestors are no longer with us. We like to think their spirits live on proudly, however, in the historic structure they helped save.

The photos that started it all! 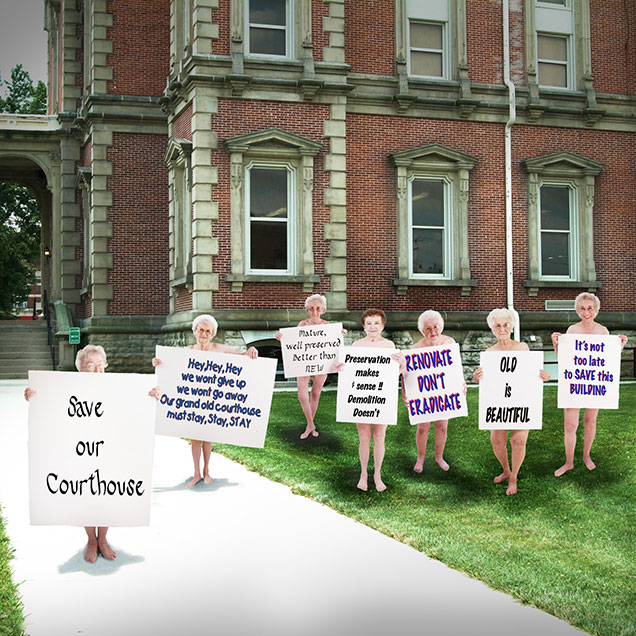 Our Courthouse Girls on a Mission